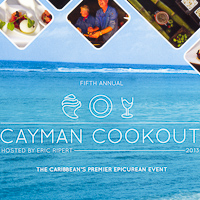 Finally getting around to posting about our two major vacations this year! First off, to celebrate our 20th anniversary we were able to kickoff the year by going to Grand Cayman a week later in January than we had previously. This allowed us to attend the Cayman Cookout, an unbelievable four-day culinary debauch hosted by renowned chef Eric Ripert. As always, his cohort in culinary crime was Tony Bourdain who we ran into in the elevator going to our room upon arrival at the Ritz! Other celebrity chefs were Jose Andres who flew onto the beach in a jetpack to begin his paella demonstration, Daniel Humm from Eleven Madison Park, Spike Mendelsohn, Sherry Yard the pastry chef from Spago, and more. With only a couple of hundred attending, it was a series of very personal and close-up events with the chefs, unlike some of the more massive extravaganzas that Food & Wine organizes. One of the many highlights was the Saturday morning “Burgers in Paradise” which started with a catamaran trip by Red Sail out to Stingray City. Honestly, we enjoyed Stingray City much more in 2012 when it was just the two of us and we hired a small boat captain privately. Having several cats arrive at the same time and dump 25 people each into the water stirred things up and did not create a very intimate encounter. After Stingray City the catamarans continued on to Rum Point for the beachside barbecue. Each celebrity chef had their own stand with their own “burger” creation. In the case of Sherry Yard, she created all sorts of wild pastries in the shape of little mini-burgers!

After four days of wild over-indulgence, I had an opportunity to get some diving in with Chris and Kate Alpers of Indigo Divers while Max was able to golf. In retrospect, we were glad that we did the all-inclusive package for our first time at the Cayman Cookout. We are definitely planning a return next year, but I think we will be a bit more choosy on the events we attend and buy our tickets a la carte. 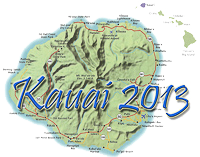 Then in May, we returned to Kauai for our usual two weeks at our Hanalei Bay Resort timeshare. We own 4 weeks which are floating and can be used for any unit at any time, but our work schedules only allow us to travel for two weeks in the Spring. This means that we book two units for two weeks and bring friends or relatives along. This year, we invited Maxine’s sister Rhona and her husband Howie for the first week. After Kauai, they continued on to the Big Island for several days. For the second week, we invited friends Courtney Silk and Bill Walter currently living in Tucson. The weather generally cooperated and we did end up repeating some activities (Na Pali coast tour, Mediterranean Gourmet luau, etc.) because they were both Kauai (and Hawaii) newbies. On the other hand, despite the many years we have been returning to Kauai there were still new things to try- pies from The Right Slice, awesome fish tacos at Monico’s Taqueria, touring the Grove Farm Sugar Plantation Museum, and more. All in all, a great time! 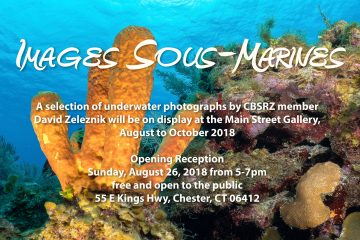 I had the first public exhibition of my underwater photography at the Main Street Gallery at CBSRZ in Chester, CT for 3 months during the Fall of 2018. I was on the waiting list for Read more…

Lake George with the Family

August was once again time for us to head up to the Lake George area for a week with Sophie. As before we stayed with Rhona and Howie at their place in Warrensburg. On Saturday Read more… 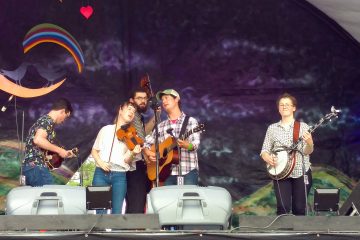 Back to Ossipee Valley for Dave and Bill

Dave and Bill once again ventured forth on their annual July bro-trip to Maine for 5 days of camping fun and music at the Ossipee Valley Music Festival. This time we stayed in the luxurious Read more…