Manics Pick On Monahan at TPB 2011

As a tribute to the talent of our dear friend and Chairman For Ever (CFE) of the Manic Mt. Boys, Tom Monahan, the Manics spent the second half of 2011 making a recording of 15 songs from his large repertoire. The CD, called “The Manics Pick on Monahan”, has just been released with all proceeds going to Compassionate Care ALS, the group who helped Tom and his wife during his long illness. Buy a copy and help the families affected by this awful disease at http://www.ccals.org/monahan-manic.php. In further support of this effort, the Manic Mt. Boys performed twice at the 2011 Thomas Point Beach Bluegrass Festival in Brunswick, Maine. Videos of Saturday and Sunday’s stage shows can be seen at: http://www.zeleznik-klein.com/mmb/tpb2011/index.html 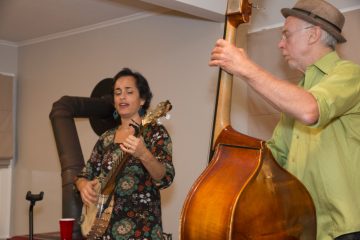 Having never heard of Evie Ladin or Keith Terry before, Maxine and I RSVP’d to Thom and Lisa Sayers who were hosting a house concert by the duo. Not knowing what to expect, we arrived Read more…

Dear friend Tom Monahan who suffered from ALS for the last several years, left this earth on Dec 3rd to join the great picking circle in the sky. His passing has spurred me to collect Read more…

In November 2009, Max attended a conference in Orlando with Dave tagging along. Also attending the conference was Max’s best friend Maureen Coumas. Together we took some time to visit Universal Studios and Gatorland. Click Read more…