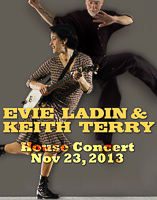 Having never heard of Evie Ladin or Keith Terry before, Maxine and I RSVP’d to Thom and Lisa Sayers who were hosting a house concert by the duo. Not knowing what to expect, we arrived early on a cold November Saturday night to participate in the pre-concert potluck. Yes, I had failed to do my requisite google and youtube’ing before the show. So inquiring minds wanted to know, but even Lisa and Thom had no real clue as to what was in store for us. Apparently, Evie and Keith, who are from Oakland, were touring New England and reached out through mutual friends to find a house concert venue before they were to head back home for the holidays. What followed was a complete delight and wonder to everyone that attended! Evie has a wonderful voice, writes some amazing songs, and is extremely talented on the clawhammer banjo, while Keith plays bass and is a master of “body music” percussion. Their crossover mashups between old-time and more new-age street music was a revelation. I wish I had shot video instead of taken photos, but you can go online and search them out. In the meantime, see the album and the delighted new fans by clicking here or on the photo.

Manics Pick On Monahan at TPB 2011

As a tribute to the talent of our dear friend and Chairman For Ever (CFE) of the Manic Mt. Boys, Tom Monahan, the Manics spent the second half of 2011 making a recording of 15 Read more…

Dear friend Tom Monahan who suffered from ALS for the last several years, left this earth on Dec 3rd to join the great picking circle in the sky. His passing has spurred me to collect Read more…

In August, we took our usual trip up to the Lake George area to stay with Flo for a week at her cabin in Warrensburg, NY. One of the evenings we took her and Joe Read more…